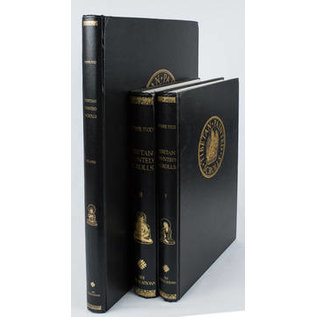 Volume I of Tibetan Painted Scrolls is a huge survey of five hundred years of Tibetan cultural and religious history. There are chapters on the different Buddhist lineages and their traditions, excellent outlines of the corpus of Tibetan religious and historical literature, and a general survey of Vajrayana Buddhism for which professor Tucci, a noted Sanskrit scholar, was excellently qualified to assess. There is also an invaluable report with descriptions of several major monasteries in Tsang, southern Tibet. These and many other monumentsdetailed herein failed to survive the Cultural Revolution, making the significance of these descriptionsall the more significant to Tibetan studies. The second part of volume I is an unrivalled essay on Tibetan thangka painting in fifteen chapters, including "SYmbolical Meaning of Colors and Lines," "To Paint is to Evoke," "Iconometry," "Consecration of Thangkas" etc. etc.

Volume II is a detailed description of the 195 thangkas, which include a tremendous wealth of information on iconography, a history of Tibetan and Indian Buddhism, references to Buddhist texts and a multitude of tanslations of inscriptions on the illustrated thangkas. There are small unrivalled monographs on the life stories of Shakyamuniand the Tibetan hero saints Padmasambhava, Tsongkhapa and the Third Dalai Lama. Tucci writes for nearly one hundred pages on the Jataka Tales, or stories of Sakyamuni's adventures in his many incarnations on the path to Supreme Enlightenement. With the benefit of a large number of paintings as his illustrations, he offers a versatile analysis of iconology, iconography, hagiography, history,sociology and linguistics.

Volume III contains the illustrations of the 195 thangkas, illustrated manuscripts and bookcovers, which Tucci obtained during his seven expeditions to Tibet between 1933 and 1947. The pictures in this edition are quality enhanced, better than in the first edition!

This SDI edition (1999) of Tucci's seminal work on Tibetan Buddhist painting, first published in 1949, original copies of which have long been unobtainable. Actually, it is also this reprint out of print and more and more expensive!