The History of Central Asia, Vol 4, The Age of Decline and Revival, by Christoph Baumer 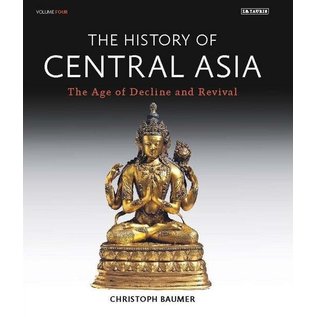 For more than a hundred years, Central Asia was the heartland of the mightiest military power on the planet. But after the fragmentation of the all-conquering Mongol polity, the region began a steep decline which rendered this former domain of horse lords peripheral to world affairs. The process of deterioration reached its nadir in the second half of the nineteenth century, when the former territories and sweeping steppes of the great khans were overrun by Tsarist Russia. In the concluding volume of his acclaimed Central Asia quartet, Christoph Baumer shows how China in the east, and Russia in the northwest, succeeded in throwing off the Mongol yoke to become the masters of their own previous rulers. He suggests that, as traditional transcontinental trade routes declined in importance, it was the 'Great Game' - or cold war between Imperial Russia and Great Britain - which finally brought Central Asia back into play as a region of strategic importance. This epic history concludes with an assessment of the transition to modern independence of the Central Asian states and their struggle to contain radical Islamism.