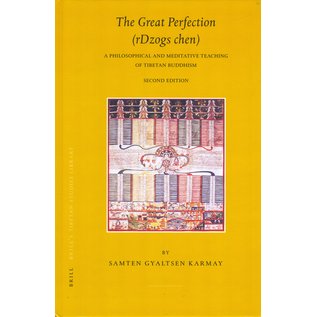 The Great Perfection (rDzogs chen in Tibetan) is a philosophical and meditative teaching. Its inception is attributed to Vairocana, one of the first seven Tibetan Buddhist monks ordained at Samye in the eight century A.D. The doctrine is regarded among Buddhists as the core of the teachings adhered to by the Nyingmapa school whilst similarly it is held to be the fundamental teaching among the Bonpos, the non-Buddhist school in Tibet. After a historical introduction to Tibetan Buddhism and the Bon, the author deals with the legends of Vairocana (Part I), analysing early documents containing essential elements of the doctrine and comparing them with the Ch'an tradition. He goes on to explore in detail the development of the doctrine in the tenth and eleventh centuries A.D. (Part II). The Tantric doctrines that play an important role are dealt with, as are the rDzogs chen theories in relation to the other major Buddhist doctrines. Different trends in the rDzogs chen tradition are described in Part III. The author has drawn his sources mainly from early unpublished documents which throw light on the origins and development, at the same time also using a variety of sources which enabled him to explicate the crucial position which the doctrine occupies in Tibetan religions.