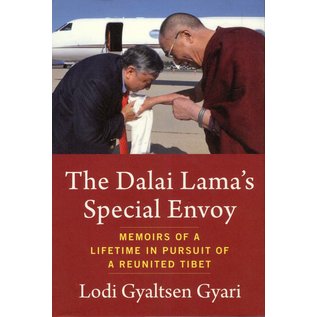 Lodi Gyaltsen Gyari spent decades striving for resolution of the Tibetan-Chinese conflict. He was the Dalai Lama’s special envoy and chief negotiator with the People’s Republic of China in the formal negotiations over the status of Tibet. In this revealing memoir, Gyari chronicles his lifetime of service to the Dalai Lama and the Tibetan cause.

Lodi Gyaltsen Gyari (1949–2018) spent nearly five decades in both governmental and nongovernmental positions working to garner international support for the Tibetan cause and resolve the Tibetan-Chinese conflict. He was the Special Envoy of His Holiness the 14th Dalai Lama and led nine rounds of negotiations with the People’s Republic of China. Gyari was also a president and executive chair of the International Campaign for Tibet.

Jan Egeland, former State Secretary, Norwegian Ministry of Foreign Affairs:
This is a must-read book for anyone interested in Tibet. For years I followed and assisted the discreet efforts of the Dalai Lama’s wonderful special envoy Lodi Gyaltsen Gyari in his quest to open a dialogue with Beijing. Although the secret backchannel ultimately did not succeed in establishing the mutual trust that could lead to talks ending generations of tension and exile, the heroic efforts of Gyari and his team described in this book can form the basis for future endeavors.

Michael van Walt van Praag, coauthor of Tibet Brief 20/20:
The Dalai Lama’s Special Envoy is the story of one of Tibet’s most extraordinary diplomats, who was at the center of the Dalai Lama’s and the Tibetan government’s efforts to resolve the Tibetan-Chinese conflict and the Tibetan people’s struggle for survival. This unprecedented insider’s record of high-level politics, diplomacy, and negotiation is a must-read for government officials and anyone else interested in Asia.

George Yeo, former Foreign Minister of Singapore:
For all those who wish for reconciliation between the Dalai Lama and China, this is a most important book to read. Lodi Gyari wrote it in order for both sides to learn from the mistakes and misunderstandings of the past. He rushed to complete it when he found out that he was ill and did not have much time left. Lodi Gyari described himself as radical in his youth. As special envoy for many years, he was a realist. He kept true his loyalty to the Dalai Lama. He was an enlightened individual who always strove to find good in others. Over nine rounds of formal talks, Lodi Gyari earned the respect of his Chinese interlocutors. Till his last breath, he believed that, with goodwill and persistence, a solution could be found between the Dalai Lama and Beijing to safeguard fully Tibetan identity and autonomy within the framework of the People’s Republic of China. The Tibetan contribution to the culture and philosophy of the Chinese nation is profound. All the placards on buildings in Beijing’s Forbidden City include Tibetan as an integral language. Tibetan threads greatly enrich the Chinese tapestry.

Ambassador Paula Dobriansky, former Undersecretary of State for Global Affairs and Tibet Coordinator, 2001–2009:
Lodi Gyaltsen Gyari has penned a masterful exposition of His Holiness’s vision of Tibet and dialogue with Beijing. He brilliantly details his life’s journey, provides extraordinary insights into his exchanges with governments, and proposes cogent recommendations for all stakeholders to secure genuine autonomy for the Tibetan people—his life's work and dedication.

Shivshankar Menon, former National Security Adviser to the Prime Minister of India:
Lodi Gyaltsen Gyari has written a fascinating account of a remarkable life, or should I say incarnation, dedicated to the service of Tibet. His narrative combines personal reminiscence, an insider’s description of the modern history of Tibet, and an examination of his role in negotiating with the People’s Republic of China on behalf of His Holiness the Dalai Lama. Living through this particularly troubled and turbulent phase of Tibet’s history, Gyari shows remarkable composure, objectivity, and lack of malice toward those whom he encountered, many of whom harmed or made difficult the preservation of Tibetan culture and the transmission of Tibetan Buddhism. The book is an evocative history of a vanished time. At the same time, what it says about the fate and future of Tibet and Tibetan Buddhism is topical and relevant when Tibet once again faces forks in the road ahead. This is a book for anyone with an interest in Tibet, Tibetan Buddhism, the diplomacy and minority policy of the PRC, or the sheer power and strength of the human spirit when faced with adversity. I trust that it will find a wide audience and strongly recommend it.