Origin of the Medicine Buddha, by Tempa Dukte Lama 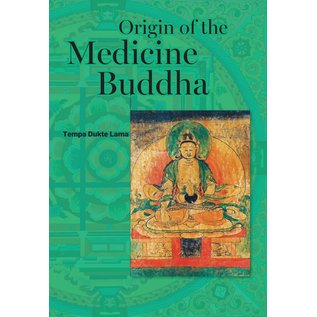 The Bön Medicine Buddha practice was first taught in the human realm eighteen thousand years ago by the Awakened One Tonpa Shenrab and his son, compassionate being Chebu Trishe, in response to a pandemic that threatened the ancient kingdom of Dawa Ruteng and caused widespread illness, conflicts, and famine. Tempa Lama retells the story of how this practice was first taught and how the Awakened One brought hope and healing to Dawa Ruteng. At that time, the king of Dawa Ruteng, Dragchen Khorlo, had become very ill due to his misguided karmic actions and was going through a deep personal crisis. His son prince Triten Khorlo invited the Awakened One to visit Dawa Ruteng with an assembly of compassionate beings. Tonpa Shenrab’s visit and profound teaching inspired and guided the king back to the light and to forgiveness and healing.

Tempa Dukte Lama, born in Humla, Nepal, is an ordained Tibetan Bön lama. He trained in Menri Monastery, India, under the close guidance of His Holiness the late 33rd Menri Trizin, worldwide spiritual leader of the Tibetan Bön tradition, from a young age. Tempa Lama is a widely known Bön teacher, artist and author of Thrul Khor Ancient Tibetan Bon Yoga, Heart Drop of the Loving Mother, Journey into Buddhahood, Inexhaustible Miracles and The Intimate Mind. He is the founder and spiritual director of Olmo Ling Bön Center and Institute in Pittsburgh, Pennsylvania, founder of the Bon Cultural Society of Humla, and co-founder of Humla Fund. Tempa Lama has lived in the United States since 2000 and teaches throughout the United States, Mexico, Canada, and Europe.
Add your review
0 stars based on 0 reviews
Bön (52) / Bon (48) / Medicine Buddha in Bon Tradition (1) / Tempa Dukte Lama (8) / Tibetzan Medicine (1)