Lama of Lamas: The Life of the Vajra Master Chogye Trichen Rinpoche, by David P. Jackson 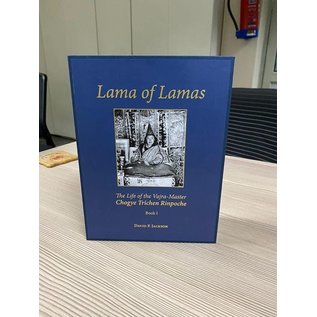 CHF108,00 * Excl. Shipping costs
Delivery time: in stock, immediate availability
Lama of Lamas is the inspiring and amazing life story of a modern buddha. Born in Tibet in 1919 into a venerable family of religious nobility, Chogye Trichen Rinpoche was enthroned as abbot of Nalendra Monastery when he was still just a teenager. After leaving his homeland as a refugee in 1959, he would eventually become in India and Nepal the revered guru of many of the greatest masters of Tibetan Buddhism.
“Khyabje Chogye Trichen Rinpoche was a very great master and important lineage holder in the Sakyapa tradition. He was a highly respected teacher, not only for me, but also for tens of thousands of devoted disciples throughout the world. His influence extended far beyond the Sakyapa tradition.
Recognizing his excellent good qualities, the greatest masters of our time from every tradition of Tibetan Buddhism, including His Holiness the Dalai Lama himself, requested Chogye Trichen Rinpoche to bestow empowerments and teachings upon them. He is one of my most important root gurus, as I received the entire Collections of Tantras empowerments, teachings and transmissions from him. He is still revered and supplicated even after his parinirvana in 2007.
Khyabje Chogye Trichen Rinpoche was a pure holder of the Vinaya, a true bodhisattva and a great Vajrayana master. He developed these qualities to a high degree of realization through years of retreat. To preserve the Dharma and create opportunities for others to practice, he also established several monasteries and retreat centers.
David Jackson has carefully written a fine and wonderfully illustrated account of Khyabje Chogye Trichen Rinpoche’s life which will preserve the amazing facts of his holy life for future generations and inform and inspire all who read it. May all who come in contact with this book receive the blessings of this incomparable master.” — His Holiness Sakya Trizin
The author, David P. Jackson had the privilege of knowing Chogye Trichen Rinpoche for many years. A long-time historian of Tibetan Buddhism, he previously published the hagiography of Deshung Rinpoche, "A Saint in Seattle".
Add your review
0 stars based on 0 reviews
Chogye Trichen Rinpoche (4) / David P. Jackson (13) / Sakya Tradition (15) / Tibetan Biography (50) / Tibetan Buddhism (45)