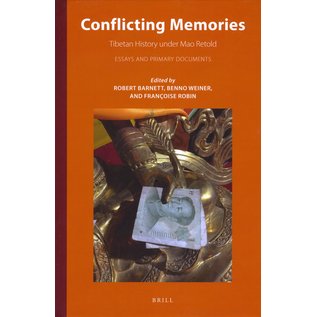 Conflicting Memories is a study of how the Tibetan encounter with the Chinese state during the Maoist era has been recalled and reimagined by Chinese and Tibetan authors and artists since the late 1970s. Written by a team of historians, anthropologists, and scholars of religion, literature and culture, it examines official histories, biographies, memoirs, and films as well as oral testimonies, fiction, and writings by Buddhist adepts. The book includes translated extracts from key interviews, speeches, literature, and filmscripts. Conflicting Memories explores what these revised versions of the past chose as their focus, which types of people produced them, and what aims they pursued in the production of new, post-Mao descriptions of Tibet under Chinese socialism.

" Conflicting Memories is a truly marvellous book. It has assembled critical readings of Tibetan memories of their fateful encounters with the Chinese Communists who came uninvited as their ‘liberators’ and ‘friends’. Supplemented with excerpts from key Tibetan writings or oral reminiscences, the volume brings forth hitherto unheard of Tibetan voices. Yet, these were not hidden voices, but often commissioned by Chinese authorities or in dialogue with them, each trying to juggle the promissory pronouncements and an unsavoury reality. Taken together, the contrapuntal reading of these memories masterfully showcases Tibetan people’s resourcefulness in dealing with a regime that often redefines its relations with Tibet while always aiming for total ownership." - URADYN E. BULAG, author of Collaborative Nationalism: The Politics of Friendship on China's Mongolian Frontier
" Conflicting Memories offers an invaluable collection aiding us to think through the complex and much contested ramifications of Tibet's incorporation into Maoist China. The mix of analytical articles by some of the best scholars now working in the area and original documents translated from the writings of astute Tibetan observers is particularly welcome. The volume will be required reading for all serious students of contemporary Tibet." - MATTHEW KAPSTEIN, author of The Tibetans
"This remarkable book offers unequalled access to the Tibetan experience of Communist nation-building. By examining how the Maoist encounter has been remembered and misremembered across many media—under the influence of ever-changing political conditions—the authors communicate both the trauma of those years and the persisting difficulty of coming to terms with it, for Chinese as well as Tibetans. The chapters, enhanced by numerous first-hand accounts and illustrations, represent the best scholarship of this field. Strongly recommended for readers interested in the history of the People’s Republic and its ethnic minorities." - DONALD S. SUTTON, co-author of Contesting the Yellow Dragon: Ethnicity, Religion and the State in the Sino-Tibetan Borderland (with XIAOFEI KANG)
"This groundbreaking work sheds unprecedented light on the various processes of historical rewriting about Tibet since the death of Mao. The multivocal composition of the book offers rich and diverse accounts of a set of key events and epochal moments that attest to the numerous obstacles in retelling the Maoist past and the experience of suffering. Countering state narratives and claims of historical truth, the volume brilliantly gives life to the deeply affective and existential components of history-making. What kind of recovery can historical narratives offer? How do remembrance and forgetfulness help to heal the wounds of past memories? Trauma caused by the period of high socialism resurfaces in often indirect, scripted ways in the intimate accounts included in this collection and, while no Tibetan scholars living in Tibet or China could openly write on such a sensitive topic, expression is given to their absent voices. This volume problematizes the “memory work” at play and the stakes involved, demonstrating that historical writing is like shifting sands – no sooner has it settled than another revisionist wave rolls in and knocks you off balance, precipitating you into an unsteady or even life-threatening situation. The contributors demonstrate the resilience of subaltern voices and the nuanced ways in which historical retellings can restore Tibetan agency in spite of continuous party-state control over history writing." - STÉPHANE GROS, Centre for Himalayan Studies, CNRS, France