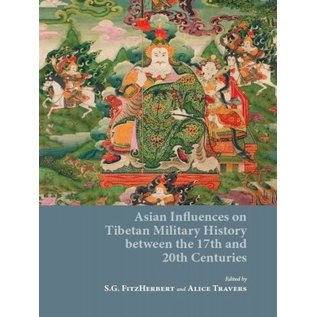 Military history is a domain in which nationalist or nation-state historical approaches often prevail. However the military institutions and military culture of any nation are also shaped by encounters with external actors, traditions and technologies. Tibetan military history between the 17th and 20th centuries clearly exemplifies this, reflecting an always unique, though ever-changing synthesis of influences and elements, in which older Tibetan traits, structural features, cultural orientations and nomenclatures, were mixed with those borrowed from foreign cultures. Predominant among the foreign influences in the early modern period were Mongol, Manchu, Chinese and Nepali, and then somewhat later, Japanese, Russian, Indian and British.

This volume focuses on the hitherto less-well-researched Asian influences among these. Over the course of the three centuries from the establishment of the Ganden Phodrang as the government of Tibet in 1642, Tibetan military forces were in many kinds of contact with a variety of Asian military traditions and institutions, whether in situations of conflict, alliance, cooperation, rivalry or subordination, and in many cases, these had a major impact on Tibet’s own army and its wider military culture.

While some of the articles in this volume focus on the culture of the military—reforms to military institutions, personnel and organisational issues, as well as evolutions in strategic orientations and technologies—others hope to shed light on the relationship between the military and society, i.e. on features of military culture as they were projected into social, cultural, political or religious spheres.

The eight articles of this volume thus explore some significant points of contact between the Tibetan military and their Mongol, Manchu, Chinese, and Japanese counterparts, based on sources not only in Tibetan language, but also in these respective languages. Th e diversity of source languages used for these articles, and hence the diversity of perspectives they embody, will we hope provide a step towards presenting a “global history” of the Tibetan military, that must, by necessity, be based on “multiple voices”.