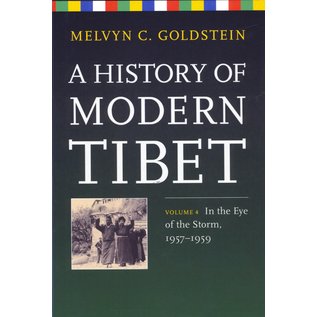 It is not possible to understand contemporary politics between China and the Dalai Lama without understanding what happened in the 1950s, especially the events that occurred in 1957–59. The fourth volume of Melvyn C. Goldstein's History of Modern Tibet series, In the Eye of the Storm, provides new perspectives on Sino-Tibetan history during the period leading to the Tibetan Uprising of 1959. The volume also reassesses issues that have been widely misunderstood as well as stereotypes and misrepresentations in the popular realm and in academic literature (such as in Mao’s policies on Tibet). Volume 4 draws on important new Chinese government documents, published and unpublished memoirs, new biographies, and a large corpus of in-depth, specially collected political interviews to reexamine the events that produced the March 10th uprising and the demise of Tibet’s famous Buddhist civilization. The result is a heavily documented analysis that presents a nuanced and balanced account of the principal players and their policies during the critical final two years of Sino-Tibetan relations under the Seventeen-Point Agreement of 1951.

Melvyn C. Goldstein is John Reynolds Harkness Professor of Anthropology and Codirector of the Center for Research on Tibet at Case Western Reserve University, and a member of the National Academy of Sciences. He is the author of many books on Tibet, including A Tibetan Revolutionary: The Political Life and Times of Bapa Phüntso Wangye (with Dawei Sherap and William R. Siebenschuh), Essentials of Modern Literary Tibetan: A Reading Course and Reference Grammar, and volumes 1–3 of A History of Modern Tibet, all published by UC Press.