A History of Buddhism in India and Tibet, by Dan Martin 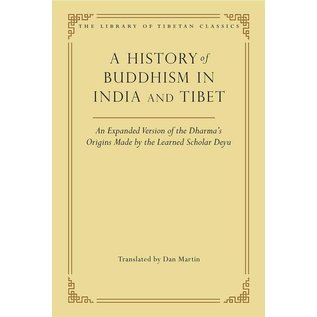 The first complete English translation of an important thirteenth-century history that sheds light on Tibet's imperial past and on the transmission of the Buddhadharma into Central Asia.

Translated here into English for the first time in its entirety by perhaps the foremost living expert on Tibetan histories, this engaging translation, along with its ample annotation, is a must-have for serious readers and scholars of Buddhist studies. In this history, discover the first extensive biography of the Buddha composed in the Tibetan language, along with an account of subsequent Indian Buddhist history, particularly the writing of Buddhist treatises. The story then moves to Tibet, with an emphasis on the rulers of the Tibetan empire, the translators of Buddhist texts, and the lineages that transmitted doctrine and meditative practice. It concludes with an account of the demise of the monastic order followed by a look forward to the advent of the future Buddha Maitreya.

The composer of this remarkably ecumenical Buddhist history compiled some of the most important early sources on the Tibetan imperial period preserved in his time, and his work may be the best record we have of those sources today. Dan Martin has rendered the richness of this history an accessible part of the world's literary heritage.

Dan Martin is the author of over fifty articles as well as two books, Mandala Cosmogony and Unearthing Bon Treasures. A renowned scholar among scholars, he has published mainly on the literary, religious, and cultural history of Tibet from the late tenth century to the present. He has been a fellow at two Institutes for Advanced Studies in Jerusalem and Oslo. His publications include Tibetan Histories: A Bibliography of Tibetan-Language Historical Works, which after twenty-five years continues to be a leading resource in Tibetan Studies, as well as the monumental bibliography Tibskrit Philology.