Startseite / The View and Practice of Quintessence Dzogchen, by Patrul Rinpoche, transl. by Tony Duff 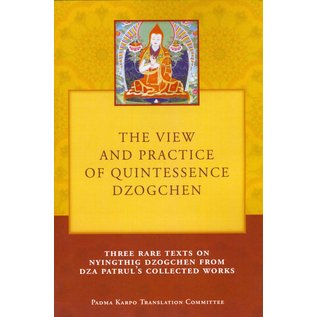 This book presents three texts concerned with what is called in Tibetan the "Dzogchen" or, in English, "Great Completion" system of teaching that explains reality and how beings can return to it from their current, confused state. The texts explain the most profound level of that teaching being called "Nyingthig" or, in English, "Quintessence".

This Longchen Nyingthig came down to a Tibetan man who grew up in the Dzachuka town of Eastern Tibet and became to be a great master of this particular teaching not to mention the Buddha's teachings as a whole. He was therefore known as "Dza Pal Trul" meaning "the glorious (pal) manifestation of enlightenment (trul) from the town of Dza".

In his early adult years, Dza Patrul received the Longchen Nyingthig teachings from great masters at Dzogchen Monastery, which is not far from his home-town of Dzachuka. Having done so, he spent the rest of his life in retreat with his disciples in the mountains behind the monastery. A number of his oral teachings on the Longchen Nyingthig were recorded in writing by his disciples and he wrote a number of texts on the subject himself. These and other writings were gathered and preserved in his Collected Works.

Three of his texts on the Longchen Quintessence that so far have not been translated into another language are presented in this book. These texts show these very high level teachings in a way that is rarely, if ever, seen. I am sure that anyone who is interested in the Quintessence Great Completion teachings, whether he or she follows the Longchen Quintessence or some other line of transmission of the teachings, will find the teachings contained in these texts to be fascinating at very least. And for those who do follow Longchen Nyingthig, there is a revelation from early in the lineage that I've never seen presented before, and which is just amazing in its content.