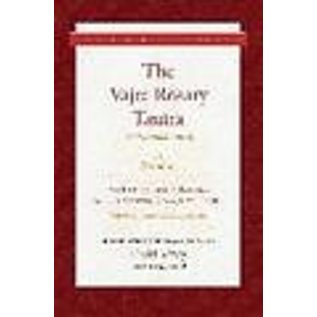 The first English translation of the Vajra Rosary Tantra, with extensive annotations from Alamkakalasha's Commentary, with a detailed introduction by the author.
The Vajra Rosary Tantra (Sri Vajramala Tantra) is one of the most significant and detailed tantras attributed to the Buddha, in his emanation as Vajradhara. It instructs a practitioner how to overcome the 108 energies and their related instinctual conceptions that circulate in the subtle body and mind and drive continued rebirth in cyclic existence, in order to attain the freedom of enlightenment. One of the explanatory tantras of the Buddhist Esoteric Community (Guhyasamaja) Tantra, its unexcelled yoga tantric system is among the most advanced systems described in Tibetan Buddhist literature. It mainly focuses on the final stage of Buddhist tantric practice, the perfection stage by means of which a person is said actually to become a buddha.
The Vajra Rosary Tantra is an encyclopedic description of the path to buddhahood and the key text on the first stage of the tantric perfection stage, where one draws the body's energy-winds into the central channel, overcoming the 108 energy-winds and instinctual conceptualities. Kittay's introductory study and Jamspal and Kittay's translation are further clarified with annotations and explanations from Alamkakalasha's commentary, a key text from the Tengyur. Readers will learn from this comprehensive text what practices to engage in to accomplish the goal of becoming a fully enlightened buddha.

Dr. David R. Kittay, adjunct professor, Columbia University, teaches courses on religion, technology, and the future. For several decades he has been translating Buddhist sutras, tantras, and commentaries, including the five explanatory tantras of the Guhyasamaja Tantra, along with Tsong Khapa's commentaries on two of them, Inquiry of the Four Goddesses and the Vajra Intuitive Wisdom Compendium; and the Symphony of Dharma Sutra for the 84000 project. He has also written other books and articles about Buddhism, religion, and law. He is president of the Tibetan Classics Translators Guild of New York and founder and director of the Harlem Clemente Course for the Humanities, teaching humanities at the Drew Hamilton houses in Harlem.
Dr. Lozang Jamspal, professor, International Buddhist College, has been translating Buddhist texts and training translators since the 1960s, and taught classical Tibetan at Columbia University for more than a decade. He is the author of numerous translations and reconstructions of the Sanskrit of many Buddhist texts, and is the executive director of the Tibetan Classics Translators Guild of New York.