Archaeopress Oxford - The Geography of Gandharan Art, by Wannaporn Rienjang and Peter Stewart

Startseite / The Geography of Gandharan Art, by Wannaporn Rienjang and Peter Stewart 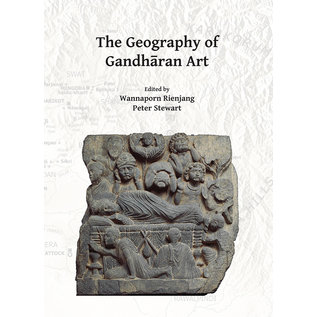 Proceedings of the second International Workshop on Gandhara Connections, Oxford 2019

Gandhāran art is usually regarded as a single phenomenon – a unified regional artistic tradition or ‘school’. Indeed it has distinctive visual characteristics, materials, and functions, and is characterized by its extensive borrowings from the Graeco-Roman world. Yet this tradition is also highly varied. Even the superficial homogeneity of Gandhāran sculpture, which constitutes the bulk of documented artistic material from this region in the early centuries AD, belies a considerable range of styles, technical approaches, iconographic choices, and levels of artistic skill.

The geographical variations in Gandhāran art have received less attention than they deserve. Many surviving Gandhāran artefacts are unprovenanced and the difficulty of tracing substantial assemblages of sculpture to particular sites has obscured the fine-grained picture of its artistic geography. Well documented modern excavations at particular sites and areas, such as the projects of the Italian Archaeological Mission in the Swat Valley, have demonstrated the value of looking at sculptures in context and considering distinctive aspects of their production, use, and reuse within a specific locality. However, insights of this kind have been harder to gain for other areas, including the Gandhāran heartland of the Peshawar basin. Even where large collections of artworks can be related to individual sites, the exercise of comparing material within and between these places is still at an early stage. The relationship between the Gandhāran artists or ‘workshops’, particular stone sources, and specific sites is still unclear.

Addressing these and other questions, this second volume of the Gandhāra Connections project at Oxford University’s Classical Art Research Centre presents the proceedings of a workshop held in March 2018. Its aim is to pick apart the regional geography of Gandhāran art, presenting new discoveries at particular sites, textual evidence, and the challenges and opportunities of exploring Gandhāra’s artistic geography.

About the Editors
WANNAPORN RIENJANG is Project Assistant of the Gandhāra Connections Project at the Classical Art Research Centre, Oxford. She completed her doctoral degree in Archaeology at the University of Cambridge on Buddhist relic cult in Afghanistan and Pakistan. Before starting her PhD, she worked as a research assistant for the Masson Project at the Department of Coins and Medals, the British Museum. Her research interests include the art and archaeology of Greater Gandhāra, Buddhist studies, and working technologies of stone containers and beads.

PETER STEWART is Director of the Classical Art Research Centre and Associate Professor of Classical Art and Archaeology at the University of Oxford. He has worked widely in the field of ancient sculpture. His publications include Statues in Roman Society: Representation and Response (2003) and The Social History of Roman Art (2008). Much of his research concerns the relationship between Gandhāran art and Roman sculpture.