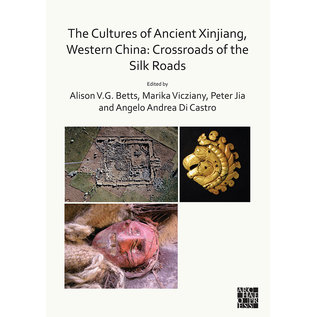 The Cultures of Ancient Xinjiang, Western China: Crossroads of the Silk Roads unveils the ancient secrets of Xinjiang, western China, one of the least known but culturally rich and complex regions located at the heart of Asia. Historically, Xinjiang has been the geographic hub of the Silk Roads, serving international links between cultures to the west, east, north and south. Trade, artefacts, foods, technologies, ideas, beliefs, animals and people have traversed the glacier covered mountain and desert boundaries. Perhaps best known for the Taklamakan desert, whose name translates in the Uyghur language as ‘You can go in, you will never come out’, here the region is portrayed as the centre of an ancient Bronze Age culture, revealed in the form of the famous Tarim Mummies and their grave goods. Three authoritative chapters by Chinese archaeologists appear here for the first time in English, giving international audiences direct access to the latest research ranging from the central-eastern Xiaohe region to the western valleys of the Bortala and Yili Rivers. Other contributions by European, Australian and Chinese archaeologists address the many complexities of the cultural exchanges that ranged from Mongolia, through to Kashgar, South Asia, Central Asia and finally Europe in pre-modern times.

About the Editor
Alison Betts, Professor of Silk Road Studies, University of Sydney, has worked on the archaeology of Central Asia for more than two decades and more recently on Xinjiang.

Marika Vicziany, Professor Emerita in Arts, Monash University, has specialised during the last four decades in Indian and Chinese culture and socioeconomic change.

Peter Weiming Jia, Research Fellow, University of Sydney, has for more than a decade studied the Bronze Age sites of Xinjiang.

Angelo Andrea Di Castro, Research Adjunct in Arts, Monash University, has been working on archaeological sites in Italy, Nepal, Australia and China for some three decades.