Wisdom Publications - The Buddhist Literature of Ancient Gandhara, An Introduction with selected Translations, by Richard Salomon

Startseite / The Buddhist Literature of Ancient Gandhara, An Introduction with selected Translations, by Richard Salomon 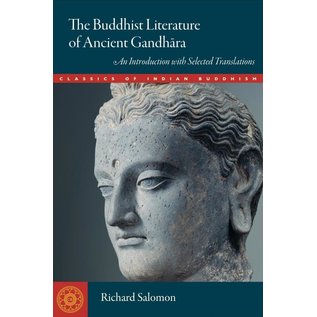 In the years following Alexander the Great’s conquest of the East, a series of empires rose up along the Silk Road. In what is now northern Pakistan, the civilizations in the region called Gandhara became increasingly important centers for the development of Buddhism, reaching their apex under King Kaniska of the Kusanas in the second century CE. Gandhara has long been known for its Greek-Indian synthesis in architecture and statuary, but until about twenty years ago, almost nothing was known about its literature. The insights provided by manuscripts unearthed over the last few decades show that Gandhara was indeed a vital link in the early development of Buddhism, instrumental in both the transmission of Buddhism to China and the rise of the Mahayana tradition. The Buddhist Literature of Ancient Gandhara surveys what we know about Gandhara and its Buddhism, and it also provides translations of a dozen different short texts, from similes and stories to treatises on time and reality.