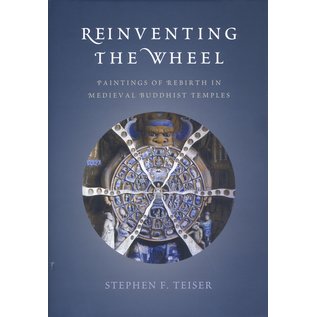 The Wheel of Rebirth is one of the most basic and popular images in Buddhist visual culture. For nearly two thousand years, artists have painted it onto the porches of Buddhist temples; preachers have used it to explain karmic retribution; and philosophers have invoked it to illuminate the contrast between ignorance and nirvana. In Reinventing the Wheel, noted scholar Stephen F. Teiser explores the history and varied interpretations of the Wheel of Rebirth, a circle divided into sections depicting the Buddhist cycle of transmigration.

Combining visual evidence with textual sources, Reinventing the Wheel shows how the metaphor of the wheel has been interpreted in divergent local traditions, from India to Tibet, Central Asia, and China. Teiser deftly shows how written and painted renditions of the wheel have animated local architectural sites and religious rituals, informing concepts of time and reincarnation and acting as an organizing principle in the cosmology and daily life of practicing Buddhists.

Engaging and accessible, this uniquely pan-Buddhist tour will appeal to anyone interested in Buddhist culture, as well as to scholars of religious studies, art history, architecture, philosophy, and textual studies.