Startseite / Problems with Chronology in Gandharan Art, by Wannaporn Rienjang and Peter Stewart 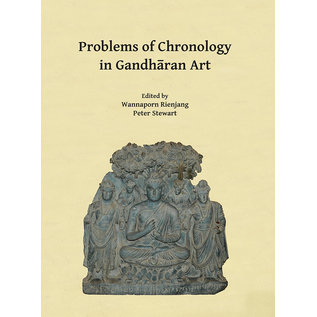 Proceedings of the first Workshop on Gandharan Connections, Oxford 2017

Since the beginning of Gandhāran studies in the nineteenth century, chronology has been one of the most significant challenges to the understanding of Gandhāran art. Many other ancient societies, including those of Greece and Rome, have left a wealth of textual sources which have put their fundamental chronological frameworks beyond doubt. In the absence of such sources on a similar scale, even the historical eras cited on inscribed Gandhāran works of art have been hard to place. Few sculptures have such inscriptions and the majority lack any record of find-spot or even general provenance. Those known to have been found at particular sites were sometimes moved and reused in antiquity. Consequently, the provisional dates assigned to extant Gandhāran sculptures have sometimes differed by centuries, while the narrative of artistic development remains doubtful and inconsistent.

Building upon the most recent, cross-disciplinary research, debate and excavation, this volume reinforces a new consensus about the chronology of Gandhāra, bringing the history of Gandhāran art into sharper focus than ever. By considering this tradition in its wider context, alongside contemporary Indian art and subsequent developments in Central Asia, the authors also open up fresh questions and problems which a new phase of research will need to address.

Problems of Chronology in Gandhāran Art is the first publication of the Gandhāra Connections project at the University of Oxford’s Classical Art Research Centre, which has been supported by the Bagri Foundation and the Neil Kreitman Foundation. It presents the proceedings of the first of three international workshops on fundamental questions in the study of Gandhāran art, held at Oxford in March 2017.

About the Editors
WANNAPORN RIENJANG is Project Assistant of the Gandhāra Connections Project at the Classical Art Research Centre, Oxford. She completed her doctoral degree in Archaeology at the University of Cambridge on Buddhist relic cult in Afghanistan and Pakistan. Before starting her PhD, she worked as a research assistant for the Masson Project at the Department of Coins and Medals, the British Museum. Her research interests include the art and archaeology of Greater Gandhāra, Buddhist studies, and working technologies of stone containers and beads.

PETER STEWART is Director of the Classical Art Research Centre and Associate Professor of Classical Art and Archaeology at the University of Oxford. He has worked widely in the field of ancient sculpture. His publications include Statues in Roman Society: Representation and Response (2003) and The Social History of Roman Art (2008). Much of his research concerns the relationship between Gandhāran art and Roman sculpture.