Padma Publishing - Lord of the Dance, The Autobiography of a Tibetan Lama, by Chagdud Tulku

Startseite / Lord of the Dance, The Autobiography of a Tibetan Lama, by Chagdud Tulku 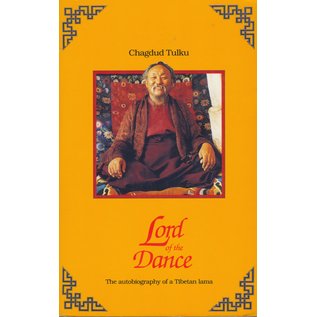 Lord of the Dance is Chagdud Tulku Rinpoche’s memoir of his life in Tibet, his escape from the Chinese Communist invasion, his years as a refugee in India and Nepal, and his return visit to his homeland twenty-eight years later. His stories of his childhood capture the last sunlit moments, the 1930s and ‘40s, when the full array of the Buddhist teachings, and particularly the Tibetan Vajrayana, could be practiced freely in a rich culture that revered its spiritual adepts.

Recognized at the age of three as a tulku, an incarnation of a high lama, Rinpoche’s extraordinary dreams and visions—some of them terrifying and with clairvoyant qualities—created a wealth of inner experience and transcendent generosity. But he was also a young boy whose untamed actions could be unbelievably naughty. His stories, told with humor and honesty, illustrate how his wildly divergent energies were re-directed into compassion and a wisdom that was unwavering in the harrowing escape from Tibet to India, and the years in exile that followed.

Chagdud Tulku Rinpoche moved to the United States in 1979 and to Brazil in 1996. In his twenty-three years in the West, Rinpoche taught thousands of people all over the world. Several became highly accomplished spiritual practitioners and teachers while many others integrated his guidance into daily life practice. This new edition includes an epilogue that lists many of his accomplishments; perhaps the greatest, however, was his ability—through teaching and example—to instill purer motivation and a deeper compassion in the hearts of those who were fortunate enough to hear and encounter this exemplary being.