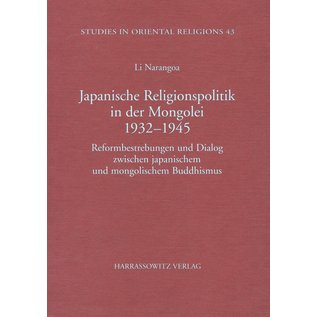 LINarangoa, Japanische Religionspolitik in der Mongolei 1932–1945. Reform-bestrebungen und Dialog zwischen japanischem und mongolischem Buddhismus.Studies in Oriental Religions 43. Wiesbaden: Harrassowitz Verlag, 1998.xiv + 299 pp. 98,00 DM paper,ISBN3-447-04028-9. (In German with Eng-lish summary)IN RECENT YEARS, colonialism and its impact on the affected cultures andpeoples have increasingly attracted the attention of researchers in various dis-ciplines. One of the speci³c topics that has invited new reflections and reap-praisal is the relationship between colonialist policies and the missionaryefforts of religious organizations. Since colonialism is taken to have been apolicy of Western or European powers, it is not surprising that missionarywork is primarily understood as an activity originating from the religion form-ing part and parcel of these powers, i.e., some brand of Christianity. It is,therefore, interesting that the present volume draws attention to missionaryefforts of Buddhist groups in cooperation with the political intentions of anon-Western power, i.e., Japan. Using a great amount of Japanese, Chinese,and Mongol sources, Li throws light on the relationship of Japanese Buddhistgroups to Japanese efforts in consolidating Japan’s political rule over Manchuriaand parts of Mongolia, and on the character of missionary efforts by thesegroups in support of their government’s policies. The general thrust of thesepolicies was to protect the Japanese acquisitions in East Asia against thethreat of communism by winning support from the Mongol rulers for theJapanese case. The Japanese understood that in order to achieve this goalthey needed to reckon with Lamaism because of the important role this reli-gion played among the Mongols and because of the high esteem it enjoyed198Japanese Journal of Religious Studies 28/1–2

among both the Mongol rulers and the population. However, they did notaccept Lamaism as a brand of Buddhism equal to theirs; rather, they con-ceived it as a religion plagued by superstition and, therefore, in need ofreform. Lamaism reformed at the hands of Japanese would then be moreakin to the general aims of the Japanese administration. In order to achievesuch a reform the missionary activity of Japanese Buddhist groups in agree-ment with general policies was considered to be important.According to the author, the beginning of missionary activities on theAsian continent by Japanese Buddhists goes back to the end of the Russo-Japanese war. However, at the time, Buddhists offered religious and welfareservices ³rst of all to Japanese soldiers and settlers. This situation changedsigni³cantly as a consequence of the sharp increase in politico-military ten-sion after 1937. From this time on, religious groups did not only become con-siderably more active, but also started to work in close cooperation withpolitical institutions to such a degree that propagating their religion was rele-gated to second rank. They established local schools where Japanese lan-guage and modern methods in medicine and agriculture were taught. Theyalso invited young lamas to Japan in order to have them study JapaneseBuddhism. This would prepare them for the mission entrusted to them(namely, to reform Lamaism at home), and it would also cultivate amongthem a new kind of loyalty, one for both the Japanese and the Japanese-installed Manchu emperor.The author briefly characterizes the general historical situation in the east-ern part of Inner Mongolia and highlights the machinations engaged in bythe Kwantung Army in its effort to enlist the cooperation of ranking lamas.This sets the general background for the book’s main section where theauthor takes up ³ve groups, one after another, to describe their advances onthe mainland and their efforts to educate young lamas at their home institu-tions in Japan. The groups are Jõdo Shinshð, Tendai, Jõdo-shð of Chion-in,Nichiren, and Shingon of Mt. Kõya. Here surface some remarkable factsabout the methods employed by the Japanese missionaries. They soon real-ized that in order to understand Lamaism they would need to enter itsmonasteries. There they would not only get at the source of Lamaist thinking,but they would also reach the people who gathered there from their homesthat were widely scattered over great stretches of land and who were thusdif³cult to reach. As already mentioned, much of the missionary effort wasdirected at teaching Japanese and modern skills, and through this at foster-ing loyal feelings towards Japan among students. Promising Mongolian stu-dents were chosen with government approval to be sent to Japan in order tobe further instructed in Buddhism at such centers as Mt. Kõya, Mt. Hiei, andChion-in. As an example of the close cooperation of religion with politicalpurposes, the author refers to a legend about Nichijin Shõnin, a disciple ofNichiren. According to this legend Nichijin Shõnin did early missionary workamong the Mongols, and so the story served as a justi³cation for governmentintervention in Mongolia, and this, as the author points out, without theadherents of Nichirenshð noticing it (166). In a short section about the reaction against these Japanese efforts, theREVIEWS199

author mentions that the Japanese efforts at reforming Lamaism promptedintense discussions about the pros and cons of reforms. While no consensuscould be reached on how the reforms should be performed, there was a sensethat reforms were necessary, and a consensus that they could not be of thekind proposed by the Japanese. The sheer amount of detail the authoradduces is testimony to the extent of the Japanese missionary effort to winthe hearts of the Mongols; and yet, as she concludes, the religious reforma-tion of Lamaism was a failure because the lamas were not prepared to changetheir beliefs. Not only that, the Japanese efforts at reforming religion had aquite different effect. Those who had become the target of intense missionaryefforts with the intention not only to reform their religion but to make themloyal to Japan, became, in fact, more aware of their own proper values asMongols, a phenomenon the author calls “national emancipation” (232).In view of the material analyzed by the author it is understandable that thebook presents mostly the Japanese view. This view is characterized by theassumption that Mongolian Buddhism had to be reformed in order to makethe Mongols more adapted to Japanese religious, and even more importantly,political intentions. It is not quite clear where “dialogue” comes into the pic-ture, although the author mentions the term explicitly in the book’s subtitle.As is made clear by the author, some of the ideas propagated by the Japanesedid interest reform-oriented people in Mongolia, but there is hardly anythingin the book that would suggest that the Japanese side considered learningabout Mongolian Buddhism in order to enter into a dialogue and not merelyattempt a unilateral “reform.” For a dialogue the partners were too unequal.On the one side the Japanese Buddhists tended to forget that they actuallyfollowed the instructions of a hidden player in the game. The Mongols, onthe other side, had their doubts about the seriousness of the Japanese monk-students in their monasteries, and suspected them to be in fact spies becausethey observed them writing notes late at night. Unfortunately the authorremains silent on the effects such suspicion had on the “dialogue” betweenMongols and Japanese.Readers will be grateful to the author for the vast amount of detail laid outin this book and for her lucid presentation. This is particularly praiseworthysince German is not the author’s native language. There is, however, a ques-tion that remains unaddressed. Even if one understands the eagerness ofJapanese Buddhists to reform Lamaism, one would like to receive some illu-mination about what might have been the reasons that all these majorBuddhists groups were so eager to promote the consolidation of Japaneserule on the continent. Although they claimed to support the promotion ofpeace within Great East Asia, they also supported their government in the warit was waging on the continent. This book may perhaps become an incentiveto ponder that question. Peter KnechtNanzan University, Anthropological Institute200Japanese Journal of Religious Studies 28/1–2