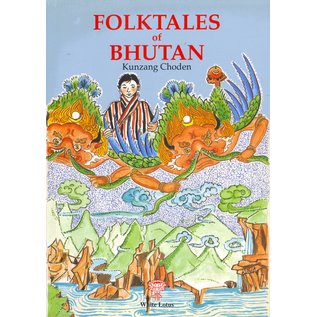 From the author of Bhutanese Tales of the Yeti another dip into the library of the storytellers from the Himalayan Kingdom of Bhutan.

Folktales of Bhutan is a collection of thirty-eight folktales and legends and is a first attempt by a Bhutanese to record in English the oral tradition of this kingdom in the eastern Himalayas. All of the stories recounted here were heard by the author when she was a child living in Bumthang in the central part of Bhutan and are the ones that she passes on to her children today, in the spirit of the oral tradition.

In Bhutan’s centuries of self-imposed isolation brought about by both its geographically remote position and political considerations, the Bhutanese oral tradition evolved and thrived. The rugged and awesome terrain and the people’s closeness to nature, together with their philosophy of karmic life cycles, an unquestioning belief in unseen co-inhabitants of the earth like spirits, ghosts and demons and the creative genius of the storytellers culminated in a remarkable repository of tales and legends which were passed on from one generation to the next.

Each story has been aptly illustrated by a Bhutanese artist who combines the traditional Bhutanese/Buddhist iconographic stylized forms together with his own artistic perceptions.