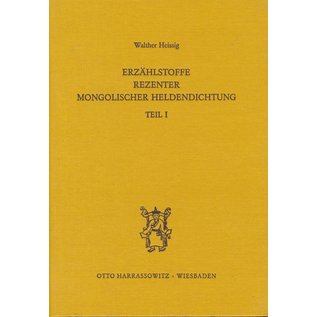 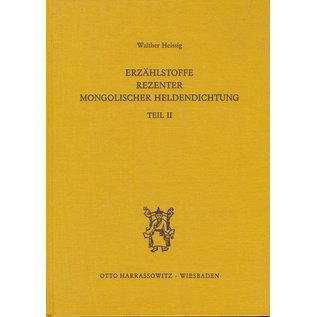 H e is s ig , W a l t h e r . Erzahlstoffe rezenter mongolischer Heldendichtung[Narrative material of recent Mongolian heroic poetry]. Parts I and II. Asiatische Forschungen, Band 100. Wiesbaden : Otto Harrassowitz, 1988. xi+936 pages. Appendix of structural typology of motifs, list of names ana titles of epics, bibliography, subject index, one foldout table. Cloth D M 378.—(set of two volum es); IS B N 3-447-02675-8; IS S N 0571-320X. (In German)In 1979 Heissig proposed a typology of motifs as a means of assessing the structural features of Mongolian epics (Heissig1979). The fast-growing body of collected and translated epics had created a need for such a typology to account for the use of for­mulaic elements in a more systematic manner. A n analysis of their motifs promised to be of use also in comparative studies with European epic literature, due to the in ­creased availability of Mongolian epics in translation.Over the years the series Asiatische Forschungen has been instrumental in introduc­ing translations of the Mongolian epics. It is fitting, then, that Volume 100 of the series is dedicated to an analysis and classification of epic motifs. Iieissig’s work, utilizing the typology he proposed in 1979, does not confine itself to epics already in translation； indeed, of the 55 considered, 53 hitherto existed only in the original. Heissig introduces each epic by means of a resume, in which he isolates the consti­tutive steps of the action, identifying each structural feature by the corresponding number in his typology. He then discusses questions of the epic5s transmission and of the vagaries and changes oi its important formulas within a particular geographical or cultural area. Quoting significant sections in the original and in translation, he demonstrates ad ocuios how the singers use structural formulas to describe the heroes, their horses, the features of their tents, etc., enabling even a reader unfamiliar with Mongolian to clearly appreciate the high degree of identity among the various formulas. In the process Heissig manages to preserve the poetic characteristics of the originals, such as alliteration at the head of the successive lines.Such basic poetic features lie at the bottom of larger, highly formulaic units out of which the singer skillfully constructs an epic. Heissig calls these units “motifs” and their logically assembled sequences “m otif chains” (M otivketten). Their iden­tification and classification enable Heissig to compare their patterns of transmission in

160B O O K R E V IE W Stwo directions. In “horizontal comparison” (2) he traces the diffusion of motifs among the singers of a specific geographical area，demonstrating changes in their content and showing the influence of such outside literary forces as Chinese storybooks; in “vertical comparison’，(3) he probes demonstrable historical teacher-disciple relations, or rela­tions in which a singer could tell the source of a particular song or parts of a song even without having himself been a direct disciple of the teacher in question.The geographical considerations of Heissig’s horizontal comparison largely under­lie the division of his work into two volumes. Volume one is mainly concerned with material from east Mongolian groups, while volume two is devoted to material from both sides of the Altai range. This comparison clarifies the idiomatic uses of formulas by a singer or a group of singers, leading to the book’s further division into eleven sec­tions. The consideration of idiomatic usages, in turn, introduces the issues dealt with in Heissig’s vertical comparison.In his attempt to unravel the message (Botschaft) (2) of narratives or motifs，Heissig makes another important point about historical connections by showing that certain motifs can be traced back to Cinggis Khan and the “ Secret History,” or to other his­torical figures and events. These events are no longer treated as individual historical facts, however: they have been given a symbolic value and so present behavior of a particular type as being either desirable or undesirable. Such comparisons can, nev­ertheless, show that certain motifs— blood pacts，for example，or the joining of families through a hero’s marriage— originate in social relationships, religious ideas, or memories of incidents from the distant past (such as the conquering of populations). Heissig warns, however, that in most cases it is difficult to pinpoint particular events, and that one must consider the whole range of a m otif’s usages before a reasonable conclusion can be reached (although I would venture that such conclusions are more in the nature of educated guesses than proofs of verifiable facts).Heissig addresses an astonishing number of quite detailed issues in his discussion of the various epics— questions of form, tradition, or meaning— yet he never loses sight of his two “ directions.” As a result the reader is always aware of the encompassing framework.In his introduction Heissig emphasizes that, in spite of the degree to which for­mulas are used, each recitation is an “entirely new creation” (4) due to the singer’s in ­dividual disposition and the specific expectations of that performance’s audience. This is an important point to keep in m ind while reading this book: we are faced with the formulas as they appear in print and can thus compare and analyze them only in this form, but such written versions are simply attempts to fixate a tradition that lives by the spoken word. Heissig succeeds admirably in showing how formulas that appear m oribund in print come to life in a singer’s narrative. We are in his and his team’s debt for making a living epic tradition accessible beyond linguistic barriers, and by so doing for providing us with an idea of what ancient and medieval epic traditions in Europe must have been like.Heissig’s discussions are always interesting, and his own narrative talent makes even the resumes a pleasure to read. The size of the book is formidable, but the ma­terial is made easily accessible by detailed summaries at the head of each chapter and indices that enable quick reference. Unfortunately, the text suffers from numerous misprints，and would have benefited from a thorough editing to straighten out sentences with beginnings and ends that do not quite connect.This book should prove of great value not only for Mongolist scholars but also for anyone with an interest in the analysis and comparison of narratives.