The History of Central Asia, 4 vols, by Christoph Baumer 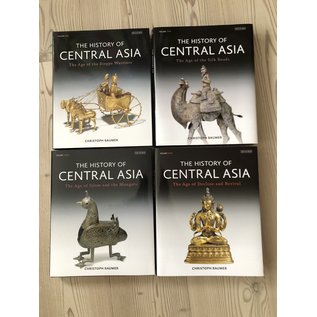 This set includes all four volumes of the critically acclaimed History of Central Asia series. The epic plains and arid deserts of Central Asia have witnessed some of the greatest migrations, as well as many of the most transformative developments, in the history of civilization. Christoph Baumer's ambitious four-volume treatment of the region charts the 3000-year drama of Scythians and Sarmatians; Soviets and transcontinental Silk Roads; trade routes and the transmission of ideas across the steppes; and the breathless and brutal conquests of Alexander the Great and Chinghiz Khan. Masterfully interweaving the stories of individuals and peoples, the author's engaging prose is richly augmented throughout by colour photographs taken on his own travels.