Ornament of Abhidharma, A Commentary on Vasubandhu's Abhidharmakosa,by Chim Jampaiyang 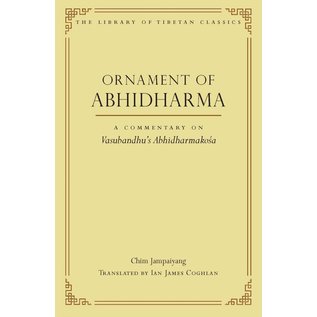 This work by a scholar of the Kadam school is the most authoritative Tibetan commentary on Vasubandhu’s Treasury of Abhidharma (Abhidharmakośa). In terms of stature and authority, Vasubandhu’s Treasury rivals Buddhaghosa’s contemporaneous Path of Purification and deals with such central themes as the dynamics of emotions and karma, of mental and meditative states; it treats both the cosmos and the life within. Chim Jampaiyang’s exposition of it is the greatest flowering of Abhidharma studies in Tibet. Usually referred to as the Chimzö, it is to this day a key textbook in the great monastic universities. A veritable encyclopedia, it spans all areas of classical Indian Buddhist knowledge and is an indispensable reference for scholars of Buddhism.

The Library of Tibetan Classics is a special series being developed by the Institute of Tibetan Classics to make key classical Tibetan texts part of the global literary and intellectual heritage. Eventually comprising thirty-two large volumes, the collection will contain over two hundred distinct texts by more than a hundred of the best-known Tibetan authors. These texts have been selected in consultation with the preeminent lineage holders of all the schools and other senior Tibetan scholars to represent the Tibetan literary tradition as a whole.