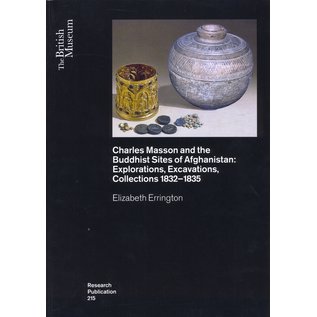 From 1833–8, Charles Masson (1800–1853) was employed by the British East India Company to explore the ancient sites in southeast Afghanistan. During this period, he surveyed over a hundred sites around Kabul, Jalalabad and Wardak, making numerous drawings of the sites, together with maps, compass readings, sections of the stupas and sketches of some of the finds. Small illustrations of a selection of these key sites were published in Ariana Antiqua in 1841. However, this represents only a tiny proportion of his official and private correspondence held in the India Office Collection of the British Library which is studied in detail for the first time in this publication. It is supplemented online by The Charles Masson Archive: British Library and British Museum Documents relating to the Masson Collection (British Museum Research Publication number 216). Together they provide the means for a comprehensive reconstitution of the archaeological record of the sites. In return for funding his exploration of the ancient sites of Afghanistan, the British East India Company received all of Masson’s finds. These were sent to the India Museum in London, and when it closed in 1878 the British Museum was the principal recipient of all the ‘archaeological’ artifacts and a proportion of the coins. This volume therefore studies the British Museum’s collection of these fascinating objects, including reliquaries, beads and coins, and places them within a wider historical and archaeological context.