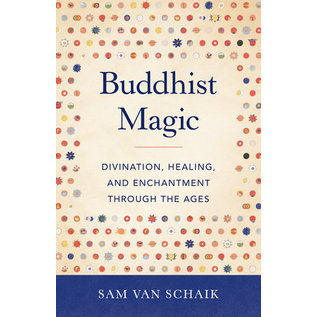 As far back as we can see in the historical record, Buddhist monks and nuns have offered services including healing, divination, rain making, aggressive magic, and love magic to local clients. Studying this history, scholar Sam van Schaik concludes that magic and healing have played a key role in Buddhism’s flourishing, yet they have rarely been studied in academic circles or by Western practitioners. The exclusion of magical practices and powers from most discussions of Buddhism in the modern era can be seen as part of the appropriation of Buddhism by Westerners, as well as an effect of modernization movements within Asian Buddhism. However, if we are to understand the way Buddhism has worked in the past, the way it still works now in many societies, and the way it can work in the future, we need to examine these overlooked aspects of Buddhist practice.

In Buddhist Magic, van Schaik takes a book of spells and rituals–one of the earliest that has survived–from the Silk Road site of Dunhuang as the key reference point for discussing Buddhist magic in Tibet and beyond. After situating Buddhist magic within a cross-cultural history of world magic, he discusses sources of magic in Buddhist scripture, early Buddhist rituals of protection, medicine and the spread of Buddhism, and magic users. Including material from across the vast array of Buddhist traditions, van Schaik offers readers a fascinating, nuanced view of a topic that has too long been ignored.