Weatherhill - Angkor Before and After, A Cultural History of the Khmers, by David Snellgrove

Startseite / Angkor Before and After, A Cultural History of the Khmers, by David Snellgrove 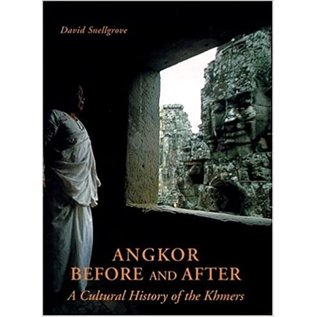 Since Cambodia's reopening to the world in the past dozen years, following its genocidal civil war, there has been a burgeoning interest in its history, art and architectural relics. In parallel with this growing popular interest has been a renewal of international scholarly work and corresponding publication on the Khmers. However, virtually without exception, these either have been aimed at the casual tourist, or alternately, have consisted of more or less esoteric monographs, highly focused on specific aspects of Khmer culture. A comprehensive survey of the Khmers, broad enough in its scope to provide an overall view, both temporal and geographic, of Khmer civilization, while sufficiently in-depth to satisfy the serious reader, has not been attempted in any language in the past half century, until now. In Angkor: Before and After , Professor David Snellgrove has provided a new cultural history of the Khmers covering the period from its very beginning in the 5th century right up to the present day, and dealing not only with Angkor, but with the whole range of Khmer achievements throughout the South East Asian mainland. Professor Snellgrove further enhances this history with new translations of several of the most significant surviving Khmer stone inscriptions, in Sanskrit and ancient Khmer, thus providing the reader with direct views into Khmer civilization. Deeply acquainted with Brahmanical and Buddhist religious traditions, Professor Snellgrove also provides unique new insights into the complex interplay of the two at times competing traditions and the impact of this interplay on Khmer culture and architecture of the period. He further clarifies the religious evolution that resulted in the eventual replacement of Brahmanical as well as earlier Khmer Mahayana Buddhist practices by the Theravada tradition that eventually predominates in Cambodia today. With detailed descriptions, complemented by rich illustration, of many Khmer sites, including both well known and many rarely visited or previously described, this book is essential reading for all who wish to further their understanding of this fascinating and highly developed medieval civilization.

The autor, Prof emeritus of London University, and formerly one of the best experts on Tibetan Buddhism. Later on  his interest was focused on Indonesia and Cambodia, where he lived and worket for more than 10 years.

The book is  a highly recommanded cultural history, with many photos published only in this volum, and new translation of inscriptions, about temples rarely visited, both for scholarly interest and the interested traveller.